Home › News › Reutlingen “Not Terrorism Related”, Attacker Was In “Love” With Victim

Reutlingen “Not Terrorism Related”, Attacker Was In “Love” With Victim

A horrific crime was committed today in Reutlingen, Germany. A pregnant Polish woman who worked at a Turkish Kebab shop was murdered by a man described by German press as a ‘Syrian Asylum seeker’. The attacker got hold of the machete from the Kebab shop he was working at.

Not much details have come out as of now from the German authorities, other than the attacker and the Polish woman knew each other.

Some reports have emerged that the man and the woman were in a relationship and were both working in the same Kebab shop.

Political adviser Julie Lenarz, has said this was not “political” related. The attacker and the victim knew each other and  he fell in “love”:

This is also reported by Germany’s newspapers Bild.de., Stuttgarter-Zeitung.de, and Eurozone analyst Yannis Koutsomitis, wrote on twitter that this crime was “not terrorism-related”: 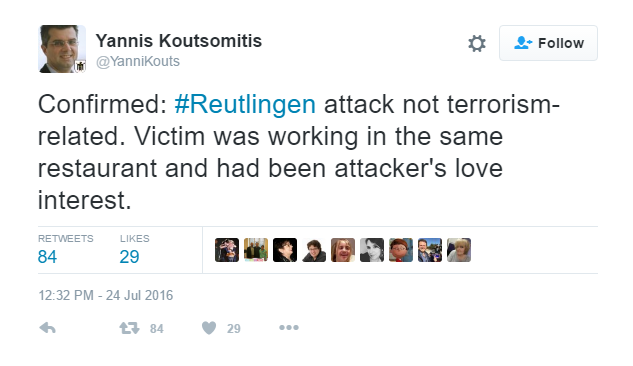 Reporter Jenan Moussa wrote on Twitter, that the attacker was stopped when the Muslim kebab owner’s son ran him over with his BMW. The attacker was shortly arrested by the Police.

This type of crime may be uncommon, but similar things have happened in America, UK and other European countries. Only few days ago there was a woman who told her story about how she was buried alive by her lover Keith Hughes. Or the case of retired U.S. Marine Brian Brimager, who pleaded guilty to killing his girlfriend and dismembering her body with a machete. There is also the case of Texas man, John Dee Weter Jr. who murdered his girlfriend with machete in front of her children. There are many more similar machete cases which can be seen here, here, here.