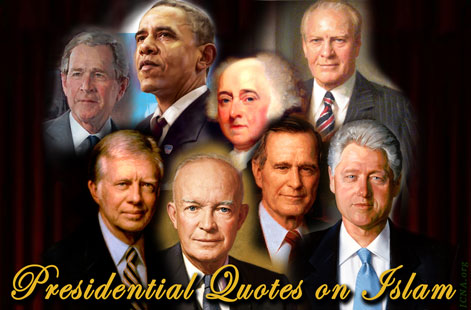 February 17, 2014 – This President’s Day, see what US Presidents have said about Islam and Muslims.

Barack Obama
“Islam has always been a part of America’s story…and since our founding, American Muslims have enriched the United States”.
“Islam has demonstrated through words and deeds the possibilities of religious tolerance and racial equality.”

“Islamic culture has given us majestic arches and soaring spires; timeless poetry and cherished music; elegant calligraphy and places of peaceful contemplation. “
[2009]

George W. Bush
“Here in the United States our Muslim citizens are making many contributions in business, science and law, medicine and education, and in other fields…[they are]upholding our nation’s ideals of liberty and justice in a world at peace.”

Bill Clinton
“[Americans know] the traditional values of Islam, devotion to faith and good works, to family and society, are in harmony with the best of American ideals. “
[1994]

George H.W. Bush
“And I’m not a student of religion, but I don’t find anything in what the principal teachings of Islam that put us in contradiction at all. In fact, the principles are the same as what—we have a diverse religious culture. But it’s kindness, it’s be good to your neighbor, it’s love, and it’s take care of children. It’s all these things that—so there’s no anti-Islam.”
[1991]

Jimmy Carter
“From the beginning, the United States has enjoyed close and valued ties with the Muslim world.”
“We have the deepest respect and reverence for Islam and all who share the faith of Islam.”

“On the basis of both values and interests, the natural relationship between Islam and the United States is one of friendship.”
[1980]

Gerald Ford
“For nearly two hundred years, our nation has derived its strength from the diversity of its people and of their beliefs. That strength has been greatly enhanced by [the Islamic] religious heritage.
[1974]

Dwight Eisenhower
“Civilization owes to the Islamic world some of its most important tools and achievements…the Muslim genius has added much to the culture of all peoples.”
[1957]

John Adams
“The United States of America…has in itself no character of enmity against the laws, religion, or tranquility of Muslims”.
[1796]