The stories we have told in the following article here, on Zaynab and Muhammed are favorite among orientalists and missionaries, they rehash this false and fabricated story as if it is a revelation from the Heavens.

Please do understand that many enemies of Prophet Muhammed used to concoct false stories and false Hadith to degrade him. This is why Islamic scholars came about with the science of Hadith (Uloom al-Hadith) to find out whether a report is authentic or rejected (munkar) or fabricated (Mawdu). The grading was done so meticulously. The Hadeeth was graded based on the study of transmission by which it reached us. If a chain of transmission has gaps in it or contradictions or contain people who were known liars and fabricators, then the Hadith would not be accepted. This story, as we have seen from the scholars commenting on is baseless, fabricated by those who want to degrade our Noble Prophet Muhammed (p).

It is like imposing and insisting Christians that they have to accept the story where Jesus kills a child for merely touching him:

“IV. 1 After that again he went through the village, and a child ran and dashed against his shoulder. And JESUS was provoked and said unto him: Thou shalt not finish thy course (lit. go all thy way). And IMMEDIATELY HE FELL DOWN AND DIED. But certain when they saw what was done said: Whence was this young child born, for that every word of his is an accomplished work? And the parents of him that was dead came unto Joseph, and blamed him, saying: Thou that hast such a child canst not dwell with us in the village: or do thou teach him to bless and not to curse: FOR HE (JESUS) SLAYETH OUR CHILDREN.” (The Infancy Gospel of Thomas – The Apocryphal New Testament” M.R. James-Translation and Notes Oxford: Clarendon Press, 1924 – online source)

In the previous two series of articles we showed what happened to Zaid and Zaynab’s marriage and why the Prophet (p) married Zaynab, the two articles can be seen here and here.

In the latest attempt to smear the character of Prophet Muhammed (p), some critics have questioned and made a claim that the Prophet (p) wanted to marry Zaynab before any revelations came down from God. For this, they use the following authentic Hadith reports to support their claim(s):

“Anas (Allah be pleased with him) reported: When the ‘Iddah of Zainab was over, Allah’s Messenger said to Zaid to make a mention to her about him. Zaid went on until he came to her and she was fermenting her flour. He (Zaid) said: As I saw her I felt in my heart an idea of her greatness so much so that I could not see towards her (simply for the fact) that Allah’s Messenger had made a mention of her. So I turned my back towards her. and I turned upon my heels, and said: Zainab, Allah’s Messenger has sent (me) with a message to you. She said: I do not do anything until I solicit the will of my Lord. So she stood at her place of worship and the (verse of) the Qur’an (pertaining to her marriage) were revealed, and Allah’s Messenger came to her without permission. He (the narrator) said: I saw that Allah’s Messenger served us bread and meat until it was broad day light and the people went away, but some persons who were busy in con- versation stayed on in the house after the meal. Allah’s Messenger also went out and I also followed him, and he began to visit the apartments of his wives greeting them (with the words): As-Salamu ‘alaikum, and they would say: Allah’s Messenger, how did you find your family (hadrat Zainab)? He (the narrator) stated: I do not know whether I had informed him that the people had gone out or he (the Holy Prophet) informed me (about that). He moved on until he entered the apartment, and I also went and wanted to enter (the apartment) along with him, but he threw a curtain between me and him, as (the verfes pertaining to seclusion) had been revealed, and people were instructed in what they had been instructed. Ibn Rafii had made this addition in his narration:” O you who believe, enter not the houses of the Prophet unless permission is given to you for a meal, not waiting for its cooking being finished…” to the words”… Allah forbears not from the truth.” (Sahih Muslim Book 8, Hadith 3330 (Eng. Edit.))

Their claims go something along the lines, since 33:37 injunction regarding Muhammed and Zaynab wasn’t composed until after he had offered to marry her, the above Hadith reports (they assert) proves that Muhammed wanted to marry Zaynab way before the verse of the Quran (33:37) was revealed.

The injunction in regards to 33:37 was revealed at the time when Zaid was going over to Zaynab to propose, that Muhammed (p) had to marry her as it was Divinely sanctioned on him. Furthermore, if you read Quran 33:37 carefully, the words used shows that the verse is foretelling of what happened in regards to the whole incident,

“And [remember, O Muhammad], when you said to the one on whom Allah bestowed favor and you bestowed favor, “Keep your wife and fear Allah ,” while YOU CONCEALED WITHIN YOURSELF THAT WHICH ALLAH IS TO DISCLOSE. And you feared the people, while Allah has more right that you fear Him. So when Zayd had no longer any need for her, WE MARRIED HER TO YOU in order that there not be upon the believers any discomfort concerning the wives of their adopted sons when they no longer have need of them. And ever is THE COMMAND OF ALLAH ACCOMPLISHED.” – Quran 33:37

“THERE IS NOT TO BE UPON THE PROPHET ANY DISCOMFORT CONCERNING THAT WHICH ALLAH HAS IMPOSED UPON HIM. [This is] the established way of Allah with those [prophets] who have passed on before. And ever is the command of Allah a destiny decreed.” Quran 33:38

A further point to take note, what the detractors fail to understand is that when Allah sends down revelation to His Prophet (p), this revelation does not consist of Quran only. There is the Quranic revelation, and there is the verbal revelation. This second type of revelation is sent down but not included in the Quran. The second revelation is called “Wahee Ghair matlu”.

In the above verse, we see and shows that the Prophets of the past (before Prophet Muhammed) all received revelation. But it is a known fact that many of them did not receive a Book. The fact that many of the Prophets before Prophet Muhammed (p) did not receive a Book shows that there exists revelation outside of these books. Let’s read the following verse:

“And [remember] when the Prophet confided to one of his wives a STATEMENT (HADITH); and when she informed [another] of it and Allah showed it to him, HE MADE KNOWN PART OF IT AND IGNORED A PART. And when he informed her about it, she said, “Who told you this?” He said, “I was informed by the Knowing, the Acquainted.” – Quran 66:3

In the above verse, we can see that Allah (via Angel Jibril (as)) informed Prophet Muhammed (p) of something and he told his wife a part of it, and kept the remainder secret. Now, of course, this cannot mean that the revelation he shared was a verse of the Quran and kept hidden some of it. Reading the verse, it is evident that Prophet Muhammed (p) received revelation besides the Quran. For further evidence on verbal revelations being sent down, please read the following article, scroll down to see the section of “Prophet (pbuh) received two kinds of revelations”, by scholar Mufti Muhammed Taqi Usmani: “Prophet Muhammed (p) Was Sent To Teach & Explain The Quran”.

What Happened To The Captive Women In Awtas Incident? 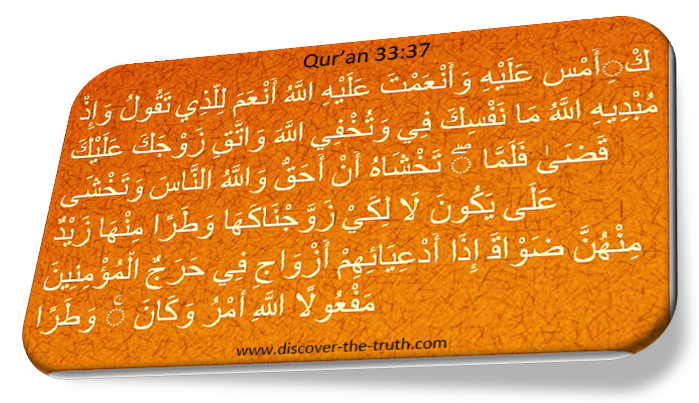