Home › News › Are Muslims Allowed To Lie To Disbelievers?

Are Muslims Allowed To Lie To Disbelievers?

No! We have responded in detail on the claim made by critics that Muslims are allowed to ‘lie’ to disbelievers with impunity. However, no such thing exists anywhere in our scripture. The claim on this is fabricated by delusional individuals in order to spread propaganda against Islam. For further detail on this read our refutation on the passages quoted by critics, click on the article here.

A few introductory Words to the Wise. … The believer should inculcate good qualities in his character and shun immoral actions. Everyone should try to translate into practice all such virtues with the conviction that these are the Commandments of Allah. These should be obeyed in such an implicit manner as the laws that govern our political and administrative system. Our consciousness must fall in line with them and the more it conforms with them, the higher will be its spiritual eminence. All virtuous deeds should be performed and evil actions should be avoided and condemned for the sake of moral consolation and spiritual elevation. Above all the real motive behind all noble acts should be to seek the pleasure of Allah without caring for the appreciation and criticism of the public. If moral acts are based on selfish motives and materialistic gain, they lose their spiritual effects. In case these are performed in obedience to Allah, they become acts of devotion and assume the colour of the attributes of Allah.

Islam teaches man to be honest, sympathetic and truthful even in adverse circumstances ignoring all sorts of expected complications. He should help others at the cost of his own interest. He should remain patient under the hardest afflictions. He must be submissive without losing his self-respect. He should display courage, meekness and honesty at proper occasions.

Islam exhorts him to forgive but not in such a manner as to embolden the criminals. Similarly Islam condemns all vices such as adultery, murder, theft, falsehood, back-biting, etc. These vices should not be practiced only but these are required to be suppressed as far as possible.

Falsehood is one of the major sins whereas truthfulness is a great virtue. The former is utter darkness whereas the latter sheds lustre like the moon. The Holy Qur’an says:

‘Truth has appeared and falsehood has vanished: surely falsehood is a thing to be vanished.’ – Qur’an 17:81

Truthfulness is a basic moral virtue which helps to cultivate many other good qualities in man. It prevents those who practice it, from falling into the pits of evils. A truthful man is honest, trustworthy, clean-hearted, God-fearing and courageous. He keeps his promise and never betrays others in connection with trusts. The Holy Qur’an says:

‘Stand fast to truth and justice for Allah’s sake, though it may be against yourselves or your parents or your near relatives.’ Qur’an 4:135

Those who believe in Allah and the Apostle, are the truthful and faithful ones in the sight of their Lord. They shall have their reward and their light. The most hateful thing in the sight of Allah is falsehood and consequently He curses those who are liars. It is narrated on the authority of Abdullah bin Mas’ud that the Messenger of Allah (p) said:

The only key to open the gate of spiritual kingdom is truth. A man guilty of numerous vices such as drinking, hypocrisy, back-biting, debauchery, etc; can rectify himself if he adopts the habit of speaking the truth. A man who abstains from telling a lie, becomes pious and pure.

It is reported on the authority of Abdullah bin Umar that the Messenger of Allah (p) was questioned:

The Messenger of Allah (p) said:

‘Lie is the mother of sins.’

One day a man addicted to drinking, theft and debauchery came to him for his reformation. The Holy Prophet (p) advised him to refrain from lying and directed him to see him on the next occasion. He gladly gave his consent to his advice thinking that it would not interfere with his favourite habits. One day he was served with wine. He abstained from drinking it because he thought it to be shameful act to take wine and make its confession before the Holy Prophet (p). Similarly he gave up debauchery, stealing and many other evil habits. His promise to speak the truth saved him from committing many crimes and afterwards he could never imagine to repeat those in future.

It is unlawful to tell a lie to amuse others. It is reported on the authority of Bahar bin Hakim that the Messenger of Allah (p) said:

‘Woe to him who holds talk and talks falsehood to make people laugh thereby: Woe to him.’ – (Ahmad)

WHEN FALSEHOOD IS PERMISSIBLE

It is a grave sin to tell a lie but falsehood is permissible in a few following exceptional cases:

(A) For bringing reconciliation among the hostile Muslims.

(B) For parching up differences between the wife and the husband.

(C) For saving the life and the honour of an innocent person from the high-handedness of tyrants and oppressors if one finds no other way to save them.

It is reported on the authority of Asma bint Yazid that the Messenger of Allah (p) said:

‘Falsehood is unlawful except in three (matters): falsehood of a man to his wife to please here, falsehood in war, falsehood in restoring peace among men.’ – (Tirmidhi)

Every word of false talk makes a black pot in the heart. It should be removed by the polish of the remembrance of Allah. If a man goes on telling lies constantly, the black spots cover the whole region of heart and he is enlisted as a confirmed liar.

Islam has strongly condemned a person who plays double game. He is indeed, a liar and thinks himself clever enough to befool others. Double-facedness is one of the most detestable shortcomings of the character of a person because this feature is born of hypocrisy, insincerity, cowardice and selfishness.

It is reported on the authority of Abu Huraira that the Messenger of Allah said:

‘The worst among the people is the double-faced one; he comes to some people with one face and to others with the other face. (Muslim)’ [1]

Deceit is the root cause of misfortune. A deceitful-man adopts unfair devices to attain temporary gains but he can never succeed in this world and the hereafter when his deception is detected by the public sooner or later he loses his confidence. The fineries of the materialistic world are a cause of deception for mankind but these will ruin us by diverting our attention from the remembrance of Allah. It is unlawful for the believer to indulge in deceitful activities because Allah does not like those who play deceit. The Holy Qur’an says:

The believer who refrains from playing deceit, shall enter paradise. It is reported on the authority of Thauban that the Messenger of Allah (p) said:

‘Whose dies while he is far from pride, deceit and debts, will enter Paradise.’ – (Ibn Majah)

A deceitful man has been cursed by the Holy Prophet (p). It is reported on the authority of Abu Bakr (ra) that the Messenger of Allah (p) said:

‘Cursed is he who injures a believer or plays deceit with him.’ – (Tirmidhi)

It is an admitted fact that war is a deception and therefore, deception is permissible in the battle-field. [2]

Don’t forget to follow Discover The Truth on Facebook and Twitter. PLEASE help spread the word by sharing our articles on your favourite social networks. Thank You! Jazaka’Allahu Khayran.

Response To Critics Claim ‘Allah Is A Deceiver’ – Quran 3:54

Can Christians And Jews Be Friends With Muslims? [Part 1]

Can Christians And Jews Be Friends With Muslims? [Part 2] 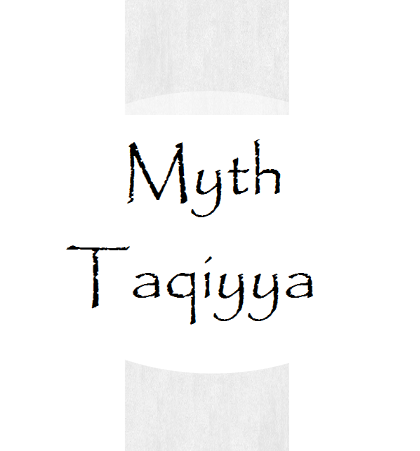