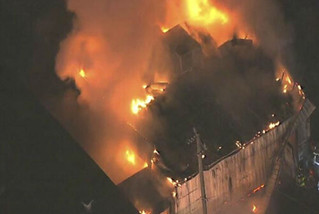 On Friday morning, part of the Quba Islamic Institute in Houston went up in flames, and local firefighters spent over an hour battling the blaze before extinguishing it, saving the institute’s school and mosque. The building set ablaze, which stored religious books, was completely destroyed, and came after the center’s staff chased off a masked man from the premises earlier this week.

Houston officials believe the fire was set intentionally, and many are calling for this to be investigated as a hate crime. Unfortunately, the hate which likely ignited this fire wasn’t just contained to the blaze, for as news of the fire spread, a retired Houston-area firefighter who still volunteers for Crystal Beach Fire & Rescue posted the following: 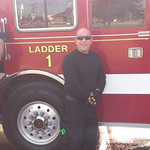 This arson attack happened in the wake of the execution of three Muslim-Americans in Chapel Hill, a likely hate crime which has shaken a Muslim-American community already reeling from an uptick in anti-Muslim hate crimes and speech since the premier of American Sniper.

Of course, this uptick must be placed within the backdrop of growing Islamophobia which continues to spread throughout American society since 9/11. Indeed, in the 13 years since 9/11, anti-Muslim hate crimes have been occurring at a steady and alarming rate. Today, Muslim-Americans are five times more likely to be targeted for such a crime than before the “war on terror” and the Islamophobia which now runs rampant in America. 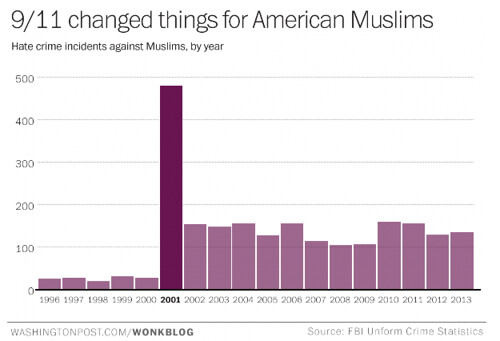 The figures shown above are believed to be drastically underrepresented, since reporting is voluntary and the Muslim-American community is deeply wary of law enforcement. Is it any wonder, given that innocent Muslim citizens and communities have been the target of illegal spying and surveillance by U.S. police and are routinely profiled on the streets and in airports?

Erica Williams Simon addressed this hate in a spot-on commentary on the ‘parking dispute’ fervor:

I want to someday live in a world where, when a senseless thing like this happens, thinking that bias was the cause seems as absurd as a parking dispute. I want to live in a world where we all feel the safety, community and love that 19-year-old Abu-Salha felt when she told public radio in an interview last summer: “It doesn’t matter where you come from. There’s so many different people from so many different places of different backgrounds and religions. But here we’re all one — one culture.”But until that day, crimes that look, smell and feel like hate will continue to be called hate by those who regularly experience hate. And for those who don’t understand that experience, a simple suggestion:

The first thing we must do to ‘solve the hate’ is to admit, loudly and fervently, that this hate exists. And that this hatred is perpetrated by the the dehumanization of Muslim-Americans in the media, on the screen, and in society at large.

Only then will Mosques stop burning.