Arabic Word ‘Jihad’ And Its Meaning

The word ‘Jihad’ has commonly been mistranslated as ‘war against unbelievers’ or equated to ‘terrorism’. The Arabic word ‘Jihad’ literally means ‘struggle’ or ‘strive to’ – that is, to exert oneself one way or another. It also pertains to doing good, and to fight evil, physically and mentally. Jihad can also apply when speaking a good word, or removing an obstacle on the road so that people do not get hurt. These are various meanings to the word ‘Jihad’. Let’s turn to the Quran and see what it says on the word,

Translation:
“So do not obey the disbelievers, and strive against them with the Qur’an a great striving.” – Quran 25:52

The act of preaching and Islamic propagation using the Quran is Jihad. In another verse, people who strive to come close to God are doing the act of Jihad,

Translation:
“And those who strive (Jahid) for Us – We will surely guide them to Our ways. And indeed, Allah is with the doers of good.” – Quran 29:69

To fight oppression physically is a form of Jihad,

“Fight in the way of God those who fight you but do not transgress. Indeed. God does not like transgressors.” – Quran 2:191

Although the word itself is not in the verse, it does have that meaning. Let us now look and see what Prophet Muhammed (p) said on Jihad. In Sahih Bukhari, it is reported that helping your parents out and being good to them by respecting and obeying them is ‘Jihad’.

In other instances, Prophet Muhammed (p) said, speaking a ‘just statement’ against a tyrannical ruler is one of the ‘greatest types of Jihad’,

“Aisha, the wife of the Prophet, said, ‘I asked the Prophet about Jihad, and he said, ‘Your Jihad is the Hajj (Pilgrimage)!’” (Kitab al-Tabaqat al-Kabir (“The Women Of Madina”) [Translated by Aisha Bewley – Ta-Ha Publishers LTD, 2015] by Muhammad Ibn Sa’d, volume 8, page 51)

Reading the above evidences show that the Arabic word ‘Jihad’ has various meanings. Turning to academics, Professor A. Rashid, author of writes,

“The Qur’anic term most often conflated with that of violence is Jihad. The Arabic verb Jahada from which the verbal noun Jihad is derived literally means ‘to strive hard, to exert strenuous effort and to struggle.’ As a multivalent Islamic concept, it denotes any effort in pursuit of a commendable aim. Jihad is a comprehensive concept embracing peaceful persuasion (16:125) and passive resistance (13:22; 23:96; 41:34), as well as armed struggle against oppression and injustice (2:193; 4:75; 8:39). The Islamic concept of Jihad should not be confused with the medieval concept of Holy war since the actual word al-harb al-muqtaddasa is never used in the Qur’an. In Islam, a war is never holy; it is either justified or not. Moreover, is not directed at other faiths. In a statement in which the Arabic is extremely emphatic, the Qur’an insists, ‘there must be no coercion in matters of faith!’ (2:256). More than this, the protection of freedom of belief and worship for followers of other religions has been made a sacred duty of Muslims. This duty was fixed at the same time when the permission for armed struggle (Jihad al-qital) was ordained (22:39-40).” [3]

Jihad: means ‘to strive’ or ‘to struggle’ in Arabic; the term has a religious connotation, involving an outwardly directed struggle against oppression and tyranny, as well as an inwardly directed personal struggle for holiness. The spiritual Jihad in quest of holiness, or Jihad bil-nafs, is seen by most Muslims as the ‘greater Jihad.’ The concept of Jihad bil-sayf, literally ‘Jihad by the sword,’ or violent Jihad, traditionally is viewed as the ‘lesser Jihad.’ [4]

We see that the Arabic word ‘Jihad’ has many shades of meanings, such as bringing people to Islam with the Quran. Speaking a ‘just statement’ against a tyrannical ruler is one of the greatest jihads, as well as being good and respectful to your parents. Finally, physically fighting oppression, in order to be liberated from persecution is Jihad as well.

“Did You Know that Jihad is in the Bible?” 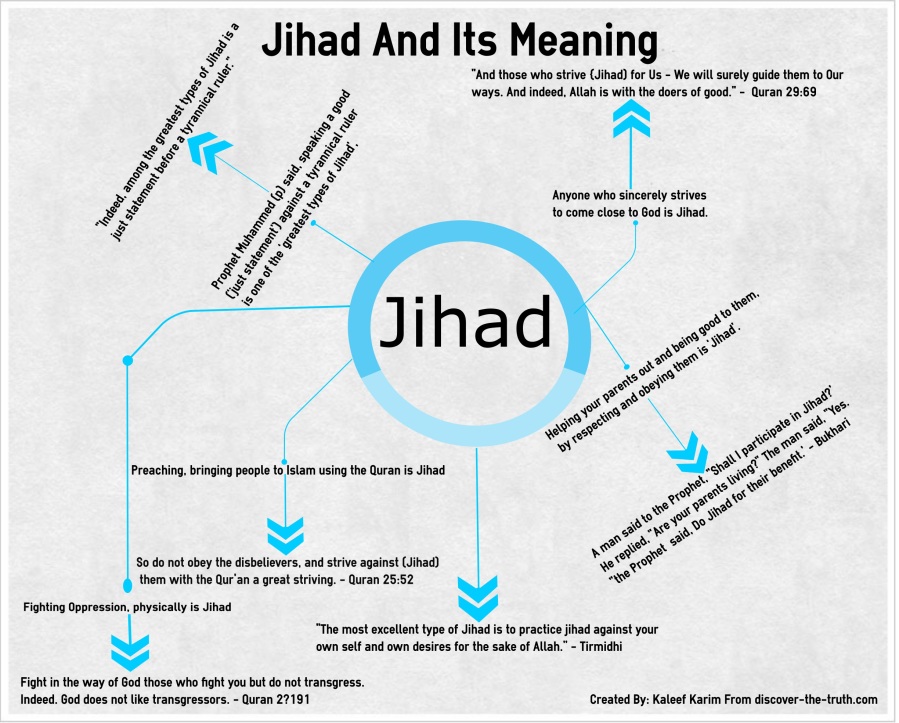 « Fox’s O’Reilly: ‘All the Wolves Have Been Muslims’
Journalist, TV Presenter Sacked For Suggesting 5 Million Muslims of France Be Deported »