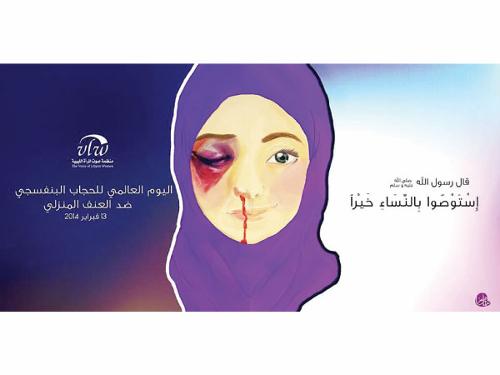 On February 13, Voice of Libyan Women (VLW), is calling on everyone to wear a purple hijab to show their support for International Purple Hijab Day.

Criticizing the UK Muslim community for lagging in its activism and opposition to marital abuse, Muslim scholars and social workers insist that social stigma and fear of associating the phenomenon with Islam are still acting as powerful deterrents for anyone to wants to address the repressing issue.

“Muslim community leaders need to make clear that Islam does not ever condone physical violence within the home,” Dr. Ahmed Sofyan from London, who has a PhD in religious studies, told OnIslam.net.

“Very often women feel as if they somewhat are the architect of their own suffering,” he added.

Dr. Sofyan added that domestic abuse should be treated as a social or cultural issue rather than a religious one.

“This culture of blame needs to change … community leaders and Imams need to dispel such beliefs and offer women the support they deserve and need,” he added.

Although Islam strongly condemns and opposes all forms of violence, especially against women, marital abuse has been an issue which communities across the UK have seldom addressed, either by fear of stigmatization or because of cultural indoctrination.

“In 2005–2006, incidents with a female victim and male perpetrator represented 87% of all incidents of domestic abuse,” the study adds.

Hena Zubeyri with MuslimMatters wrote that the Muslims lagging in activism was partially due to fear of social stigma for their faith.

“The term domestic violence is looked upon as suspect by many Muslims because it is reminiscent of western feminist ideals and doesn’t occur in traditional Islamic texts. Another reason that many do not publicly bring this issue up is because it re-enforces the stereotype that Islam is a violent religion,” she added.

On February 13, Voice of Libyan Women (VLW), a leading Libyan women’s NGO, is calling on everyone to wear a purple hijab to show their support for International Purple Hijab Day.

The campaign, launched to commemorate the death of Aasiya Zubair, a Muslim American co-founder of Bridges TV, who was murdered by her husband on February 12, 2009.

The campaign aims to stress that domestic abuse in any form is not in any way tolerated.

Speaking out against the worrying phenomenon, Amin Jamil from West Yorkshire asserted that harming is oppression and oppression is unlawful not only in Islam but in all faiths.

“Harm should not be inflicted nor should it be retaliated with harm,” Sheikh Jamil told OnIslam.net, quoting a hadith by Prophet Muhammad (peace be upon him).

The Muslim imam noted that this hadith forms one of the most important established principles in Islamic law, being related to another principle that “harm should be eliminated”.

He added that the Qur’an states that Allah’s curse is upon the oppressors, the principle mentioned in a number of verses in the Quran such as: “When ye divorce women, and they are about to fulfil the term of their waiting period, Either retain them or let them go with kindness; but do not retain them to harm them to transgress.”

Having worked closely with an array of women organizations and the local authorities as to engage a positive dialogue with communities and counteract social taboos as well as stigmatization, Sheikh Jamil explained that very often abuse is born from the belief that women are inferior to men.

“Across the ages, women have been subjected to much abuse and much inequalities; their gender perceived as lesser than that of men based on cultural, social and religious misconceptions,” he said.

“Islam teaches men to honour and respect all women … it does not in any way shape or form encourages or condones abuses.”

Imam Mohammed Jamal from Sussex has also made clear that marital abuse, whether physical, emotional, financial or sexual is absolutely contradictory with the teachings of Prophet Mohammed (PBUH) and the Qur’an.

He stressed that many hadiths specifically advised men to show kindness and mercy toward the women of their household, most particularly their wives as they are their life companions.

Henna Khan, a Muslim woman victim to years of systematic physical abuse, has dedicated her life to raising awareness against domestic abuse within the Muslim community.

“As a Muslim woman and a mother, I believe I have a responsibility toward my community and my people,” Khan, from Brighton, told OnIslam.net.

“I want others to feel it is ok to speak up … blame is not with the victims but the perpetrators of violence. As Muslims we need to understand that.

“It is never ok to strike a woman … the Prophet of God (PBUH) never hit his wives … he never belittled them or harmed them in anyway. Therefore we should all strive to emulate his example.”

In Scotland, Aisha Siddique explained that she has worked with her local authorities for the past three years helping Muslim women get out of abusive situation.

“Most women I have worked with often feel they are to blame for their husband’s behaviour, they feel ashamed,” Siddique told OnIslam.net.

“If things are to change we need to get Imams and scholars on board; as a community, we need to denounce abuse in all its forms as God does not teach us to hate but to love,” she added.

Britain is home to a sizable Muslim minority of nearly 2.7 million.

In Islam, marriage is a sacred bond that brings together a man and a woman by virtue of the teachings of the Qur’an and the Sunnah.

Each partner in this sacred relationship must treat the other properly and with respect.

A Woman is recognized by Islam as the full and equal partner of the man in the procreation of humankind.

By this partnership, she has an equal share in every aspect. She is entitled to equal rights, she undertakes equal responsibilities, and she has as many qualities and as much humanity as her partner.

Moreover, the relations between the spouses in Islam should be based on tranquility, love and mercy.