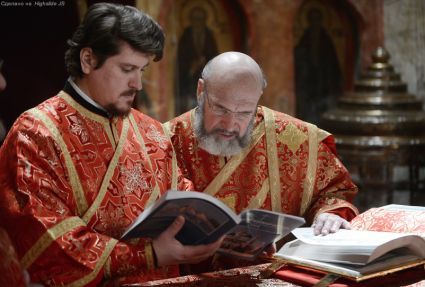 Uspenski Cathedral inside the Kremlin © patriarchia.ru

MOSCOW – A Moscow priest has announced plans by the Russian Orthodox Church to proselytize Muslim immigrants by republishing the Bible in the Central Asian languages, including Uzbek and Tajik.

“This will be our answer to the societal needs of labor migrants to culturally adapt and integrate,” Dimitry (Pershin), a priest on the missionary commission of the Moscow diocesan council, told Uznews.net on Tuesday, February 11.

“Our response is not an aggressive one. Instead it bears a certain linguistic and logical standard, which we can offer to those who come to our country,” he added.

Recently, a growing ethnical tension has been notably reported in Moscow where Central Asia and or Caucasus migrants faced various forms of discrimination.

Last November, thousands of Russian ultra-nationalists marched in Moscow against Muslim migrants in the country.

According to Dimitry, migrant workers usually work for twelve hours a day at construction sites, as street cleaners, or in the service sector, choosing to send their money to their needy families abroad.

For the Orthodox church, those desperate workers who are increasingly arriving in Moscow in search of work were easily accessed with translated bibles.

They live in poor conditions and cannot afford to pay for continuing education courses.

As a result they end up living in a sort of cultural bubble and continue to judge their new homeland and its people by stereotypes that they had acquired at home.

The priest, Dimitry, said that the church plan would help those immigrant workers to better integrate by joining its members.

He added that in this case, migrant workers should know about the Russian Orthodoxy and not fear or mistrust it but rather, as guests should, respect the hosts and the country receiving them.

The Orthodox Church plans were immediately criticized by Russian Muslim leaders as a missionary work.

“This is nothing but a missionary attempt,” Gejdar Jemal, the chair of the Islamic Committee of Russia, co-chair of All-Russian People’s movement Russian Islamic Heritage, and permanent member of Islamic-Arabic People’s Conference, told Uznews.net.

“They simply want to use the often desperate situations of labor workers living in Russia in order to achieve their own gains.”

Jemal questioned the intentions of the church and said that the Orthodox holy texts have been translated in the past into different languages including Arabic.

He added that they were also translated into Uzbek and Tajik in the early 1980s.

The Muslim leader has also accused the Russian Orthodox Church of attempting merely to attract fresh converts into its faith.

The Russian Federation is home to some 23 million Muslims in the north of the Caucasus and southern republics of Chechnya, Ingushetia and Dagestan.

Over the past two decades, since the collapse of the Soviet Union, there has been an upsurge in affiliation with Orthodox Christianity in Russia, a Pew survey released on Monday, February 10, said.

Between 1991 and 2008, the share of Russian adults identifying as Orthodox Christian rose from 31% to 72%, according to a new Pew Research Center analysis of three waves of data (1991, 1998 and 2008) from the International Social Survey Program (ISSP)

This suggests that although many more Russians now freely identify with the Orthodox Church or other religious groups, they may not be much more religiously observant than they were in the recent past, at least in terms of attendance at religious services.