Home › News › A Review of Sara Khan’s Book: The Battle For British Islam

A Review of Sara Khan’s Book: The Battle For British Islam 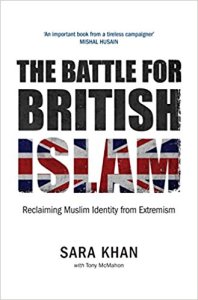 I did not really see what this book offered to the public discourse on Muslims, Islam and Britain which has not already been put out there I felt an element of irony as Sara Khan was championing a unity amongst Muslims but at the same time her book only serves to marginalise Muslims whose views on Islam she has an issue with – I don’t see anything problematic with iERA. Their members have condemned terrorism and they seem to be well-grounded members of British society. Why not try to work with these Muslims?

There is a theme in Sara Khan’s writing which highlights a conservatism amongst Muslim advocacy groups and plays a game of personalities by listing various Muslims in the public eye and their views they hold on issues such as LGBT, Islamic governance and women’s rights. What Sara Khan and her co-author fail to do is point out that these beliefs revolving around Islamic governance (how a state run by Sharia would theoretically be run) have no bearing on public life in Britain. None whatsoever! For instance, the belief that apostates should be killed is not applicable to Britain. Likewise for the punishment related to adultery.

For me it seemed all rather picayune, are we really trying to say these beliefs are affecting the way somebody lives and interacts in Britain negatively? I don’t think so. Is this not subtly playing to the notion of a conveyor belt theory where Muslims with certain beliefs which do not fit the Western liberal paradigm are potentially on the road to radicalisation? It should be “further radicalisation” as this theory would dictate anybody on the conveyor belt is already radicalised to a certain degree. Would this theory not pave the way for a more Islamophobic version from the far right (including the evangelical Christian Right) to go all-out and just label the starting point of the conveyor belt as “Islam”? That would leave Sara Khan and all of us Britain in hot water. I’d urge Sara Khan to rethink her lines of argumentation because consistency is important; giving an inch in order to prop one’s own views and oneself at the dinner table may later result in having to give a mile leaving you and your views being looked at askance by those at the same dining table you strove to be at.

What is the barometer for deciding who is radicalised? A departure from mainstream Western views? Does that not leave conservative Christians, orthodox Jews and mainstream Muslims in the firing line? And is this not really a form of mono-culturalism rather than multiculturalism where everybody is expected to follow the social zeitgeist?

Sara Khan does disappoint the rabid Islamophobes, who think Islam is about terrorism, in mentioning her opposition to extremism is inspired by Islam:

“My motivation, first and foremost, in writing this book is a sense of obligation and principle as a Muslim.” (The Battle for British Islam [Saqi Books – 2016], by Sara Khan, page 22)

She even criticises sections of the media for stoking up Islamophobic attitudes:

“Sections of the media have in effect assisted the far-Right’s anti-refugees and anti-Muslim messaging. Media headlines have included references to a ‘Muslim rape crisis’, or ‘Muslim rape epidemic’, one Polish magazine depicted on its cover a Caucasian women [sic] draped in the European Union flag being torn at by brown-skinned hands, with the headline: ‘The Islamic Rape of Europe’. This is the largest-circulation conservative weekly journal in Poland – it claimed that the crisis had been masked because of ‘tolerance and political correctness’.” (The Battle for British Islam [Saqi Books – 2016], by Sara Khan, page 145 – 146)

She also talks about “Islamism” being divisive within Muslim communities and causing friction between Muslims and non-Muslims in Britain. For her, Islamism and the far-right have a symbiotic relationship and they feed off each other. What about foreign policy and its divisive role and role in radicalisation? Sara Khan has little to say about this.

The biggest problem here is this word, “Islamism”. It’s used in the media a lot but I doubt many people would be able to define it and those who do would probably not be in uniformed agreement on what Islamism entails. It’s a made up word, it’s helpful for those who want to operate in clouds of smoke.

Sara Khan does define it, I think this definition is hugely problematic for it impugns the vast majority of Muslims, in my opinion, past and present:

“Islamism is essentially politicised Islam – but it is not synonymous with Islam. It is a relatively modern movement that seeks to revive an Islamic global political order, a caliphate in other words. Islamists see no distinction between religion and politics.” (The Battle for British Islam [Saqi Books – 2016], by Sara Khan, page 52)

Sara Khan may not know, but the Islamic caliphate only broke up, in name at least, about 100 years ago. Islam and the state have always been interwoven since the nascent Islamic community set up in Medina in the 7th century. This notion of separation of church and state only came about through Martin Luther, prior to that the West did not have such a notion as taught by Karen Armstrong. In fact, even then, beyond Luther, Christian puritans still saw the sate and faith to be linked. Professor Shedinger talks about a religion of value should want to influence the state. Everybody wants their faith or views to influence the state – they are lying if they say otherwise. What is wrong with a bunch of Muslims desiring self-autonomy and wanting to run their country the way they want? Would it not be a form of cultural imperialism to dictate to them that they have to follow the zeitgeist and paradigm in the West?

Given how the definition of “religion” is notoriously difficult to agree upon in the Religious Studies departments across the West and considering secularism is now being considered a “religion” in some quarters, are we not living in a state governed by a “religion” too? It seems to me, the big hoo-ha here is all about people with views which challenge the “religion” currently governing the state. The world has to be governed by one “religion”, secularism…or else!

« Qasim Rashid Attacked by Christian Woman Re: “How the teachings of Islam could help us prevent more sexual abuse scandal” Article
Understanding Quran 9:29 In Light Of The Earliest Historical Sources Of Islam »