Curfew has currently been declared in Aluthgama after protestors of the Bodu Bala Sena had attempted to stone the Darga Town muslim mosque erupting in a clash between the Muslims in the mosque and protesters, initial reports said. 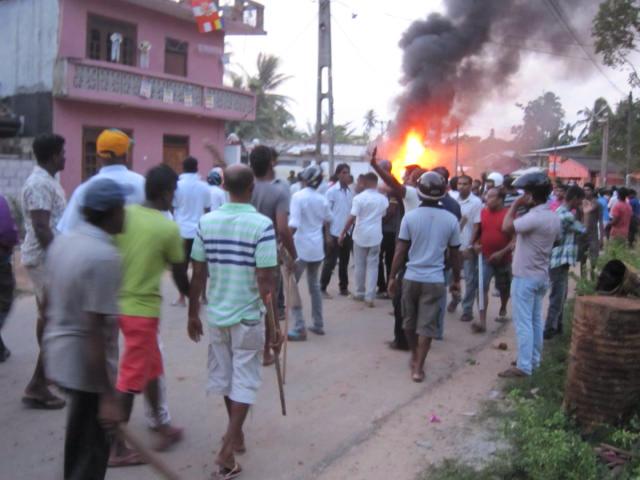 Several Muslim owned shops have been torched by the violent mobs. Risky Hardware store is currently in flames with STF soldiers firing rubber bullets to dispel the protesters.

The situation is currently tense with Military reinforcements  being sent from Colombo.

Senior Police sources confirmed to Colombo Telegraph a shortwhile ago, that the BBS mob had incited the violence following the meeting. The Sources confirmed that although Police curfew was in place shops are currently being torched.

Around 4000 Muslims are currently gathered at the Dharga Town mosque where they had taken refuge from the violent mobs. The situation comes two day after violent mobs torched six Muslim shops after Muslim youth had allegedly assaulted a Buddhist monk. When the case was taken up there was no JMO report filed detailing the inujuries on the monk while the youth have denied assaulting him.

The Kaluthara Bar refused to appear on behalf of the two suspects with two lawyers from Colombo ultimately being sent to represent them.

Todays protest came in the backdrop of caution and requests from the Muslim community to stop the protest due to the tension that arose on Poson Poya day. However, the government and the Police which in usual circumstances appeal for an order against a protest which has the likelihood of turning violent, instead permitted the mob to protest right in front of the mosque.

The Special Task Force on the ground are said to be doing an impressive job and have prevented the mob from entering Muslim residential areas. The situation still remains tense.

Police Media Spokesperson SSP Ajith Rohana requested all persons in the area not to move on thoroughfares and other streets.

« Catholic Iraqi Refugee Attacked, Beaten By A Man Who Thought She Was Muslim
Growing Islamophobia In The UK Media »