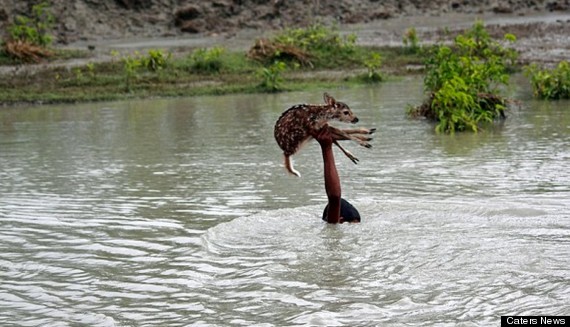 Astonishing photos have emerged from Bangladesh depicting a boy risking his own life in flood waters to help a drowning baby deer that was close to dying in the raging torrent.

The young teenager called Belal plunged into the river in Noakhali to find the fawn that had gone under exhausted from battling the current. Seconds later his arm appeared above the waterline holding the animal aloft, tired but unharmed.

Belal then battled his way to the riverbank, all the time holding the soaked animal above danger. Locals cheered as the animal, which had become separated from its parents in the floodwaters, was reunited with its family.

Belal with the baby deer.

The whole incident was captured by chance by wildlife photographer Hasibul Wahab, who was in the area on a trip. The photographer said: “He was such a brave boy – the river was so full of water and it was high tide so we thought he might drown. My friend was even ready to jump into the river to save the boy.

“But he made it, and when he returned, we thanked the boy. There were only five to seven people observe this situation but it was a phenomenal sight.”

These photos were taken by by wildlife photographer Hasibul Wahab.

« “Language is the crowning achievement of human beings”
UK: Non-Muslim customers believe that Islamic Finance is relevant to all Faiths »