“The authority is using the tactic of rape as a weapon against Rohingyas Muslims in the State of Arakan (Burma/Myanmar). This has been going on from 2012 until the people were driven out from their land,” said an aid worker of Maungdaw whose name was not mentioned.

Some cases of rape against Rohingya Muslimahs (women) that happened recently and recorded in the report mentioned. Earlier, hundreds of Rohingya Muslimahs (women) who are still teenagers, have become victims of the savagery of the Buddhist Burmese forces, they are deprived of their honour amidst the sufferings as a result of the violence committed by the Buddhist ethnics of Arakan in their villages.

In some cases, the local said, “Security forces entered the village during the night to check out the list of families where those forces raped the Rohingya women in the houses as there were no more men in the houses.”

One father of Rohingyas said, my daugher Amina (not the real name), was gang raped by the soldiers in the village of Pandaung Pin (Nawlborna) in Maungdaw until she met her death, police sent us her dead body on the next morning. We can’t forget that morning, we were confused how to give her the last shower (bath/shower before dead body is buried).” Two week later, the father also disappeared. In some cases, police and Rakhine Buddhists raped the girl in front of their families.

In other cases, Burmese military is imprisoning Rohingya women from the Arakhan region and using them as sex slaves. “Please help us. If you can help us escape from here you will go to jannah (heaven),” one woman said.

“Many military men come, we can’t breathe. If we stay like this we will go to hell.” Another 18-year-old Rohingya woman I met who escaped from Rakhine state said, she was one of the women who was raped twice by police, but finally, a policeman helped her to escape form Rakahine state.

I tried to speak to her in Rakhine language, the woman replied, “Don’t speak Rakhine with me any more, I am Muslim and was a prisoner there.”Her intended meaning of what she was to say. she felt clear, these women are being raped, and they don’t have to say it explicitly for anyone to understand what’s taking place.

However, there is no report of how their conditions are on the international Media.

The Rohingya Muslims are killed while their houses are all burned down, and the Masjids (Mosques – place of worship) are also burned down, their properties are seized and the Muslimahs (women) are raped.

Strangely, the Burmese Government appears incapable in facing the brutality of its forces and citizens. According to an elder of Maungdaw, the Government is deliberately committing a systematic ethnic cleansing to make the Muslim Rohingya community run away from their land. 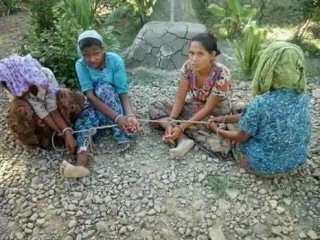