This is a continuation of articles on the claim made by Christian missionaries that Prophet Muhammed (p) wore his wife’s clothes. In the previous two piece articles, which can be seen here and here, we covered details surrounding the Arabic word thawb and how the Hadith was classically understood. We have also seen from other historical reports that which the Prophet (p) was covering himself with was a “sheet”, or “blanket” of Aisha.

In this article we will respond and refute the lie on a certain Hadith, we will uncover the depth missionaries go to, to lie and deliberately mistranslate and deceive readers to degrade the impeccable character of Muhammed (p).

Read how the following Arabic Hadith report is translated into English by missionaries:

From Sahih al-Bukhari, Hadith Number 3941
Volume Title, “The Book of Virtues.”
Chapter Title, “The Virtues of Aisha.”
Narrated by Abdullah ibn Abdel Wahab, narrated by Hamad, narrated by Hisham, narrated by his father who related that the people would present their gifts (to the prophet) when he was at Aisha’s house. The companions of Um Salamah said, “O Um Salamah! By Allah the people wait to give their gifts till it is Aisha’s day and we desire the good things just as Aisha does. So ask the prophet to command the people to give him his gifts in whatever house of his wives he may be in.”

Um Salamah mentioned this to the prophet but would not respond to her. She repeated it a second time but he still would not respond to her, but on the third time he said, “O Um Salama! Do not hurt me with Aisha; for by Allah, the inspiration did not descent on me while I was IN THE COVERINGS (lihaf) of any of you (women) except Aisha.” Source- http://hadith.al-islam.com/Display/Display.asp?Doc=0&Rec=5672

“3775. Narrated Hisham’s father: The people used to send presents to the Prophet on the day of Aishah’s turn. Aishah said, ‘My companions (i.e., the other wives of the Prophet) gathered in the house of Umm Salama and said, ‘O Umm Salama! By Allah, the people choose to send presents on the day of Aishah’s turn and we too, love the good (i.e., presents etc.) as Aishah does.
You should tell Allah’s Messenger to tell the people to send their presents to him wherever he may be, or wherever his turn may be.’ Umm Salama said that to the Prophet and he turned away from her, and when the Prophet returned to her (i.e., Umm Salama), she repeated the same, and the Prophet again turned away, and when she told him the same for the third time, the Prophet said, ‘O Umm Salama! Don’t trouble me by harming Aishah, for by Allah, the Divine Revelation never came to me while I was UNDER THE BLANKET of any woman amongst you except her.” (The Translation Of the Meanings Of Sahih Al-Bukhari, Arabic English, Translated by Dr. Muhammad Muhsin Khan (Formerly Director, University Hospital, Islamic University, Al-Madina Al-Munawwara) [Darussalam Publishers and Distributors, Riyadh – Saudi Arabia, Maktaba Dar-us-Salam, 1997], volume 5, page 76 – 77 (Book 62 – The Virtues Of The Companions Of The Prophet, No. 3775))

Here is a screenshot for the above quote, from the book itself: 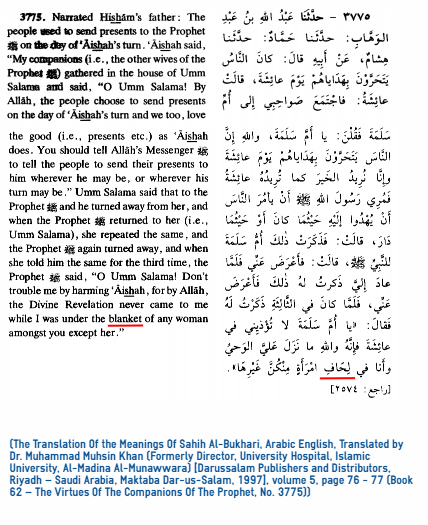 And here is Bewley’s Translation:

“3564. It is related from the father of Hisham that the people used to aim to give gifts on ‘A’isha’s day. ‘A’isha said, “My companions (the wives) gathered at Umm Salama’s and said, ‘Umm Salama! The people take care to give their gifts on ‘A’isha’s day. We desire the good as ‘A’isha does. Go and tell the Messenger of Allah, may Allah bless him and grant him peace, to command people to give to him wherever he is, or wherever his turn is.'” She said, “Umm Salama mentioned that to the Prophet, may Allah bless him and grant him peace, and she said, ‘He turned away from me. When he returned to me, I mentioned that to him and he turned away from me. When I mentioned it to him the third time, he said, ‘Do not injure me regarding ‘A’isha. THE REVELATION DOES NOT COME TO ME WHEN I AM UNDER THE BLANKET OF ANY WOMAN OF YOU EXCEPT HER.'” (Sahih al-Bukhari, volume 5, Chapter 66. Book of the Virtues of the Companions. XXX: The excellence of ‘A’isha [Bewley Translation])

What we uncover here is clear-cut deception from missionaries to translate Arabic Hadith reports into something that is alien to the original text. Furthermore, the following Arabic-English Lexicons clarify that “lihaaf” means a blanket.

Just so readers are aware, with each quotation we will leave screenshots of the actual quote from the books.
English-Arabic Dictionary – Professor Francis Joseph Steingass:

Arabic-English vocabulary for the use of English students of modern Egyptian Arabic, compiled – Donald Cameron:

Arabic-English vocabulary of the colloquial Arabic of Egypt – Socrates Spiro:

With the evidences shown, we see that lihaaf the Prophet Muhammed (p) used in bed was a blanket of Aisha, not actual clothes as some missionaries have claimed.