Aisha’s Thawb: Was It A Blanket Or Dress? [Part 1]

Some Christian missionaries have gone so low as to spread a lie that the Prophet (p) used to wear his wife’s clothes. They base their lies on a few Hadith reports which they deliberately misrepresented/mistranslated for their own propagandist cause.

In this first article, we will show meanings for the word thawb and how it was understood classically. The two reports say that the Prophet used to receive revelation when he was with Aisha in the same bed covered by her thawb:

“She told that the people used to choose: ‘A’isha’s day to bring their gifts, seeking thereby to please God’s messenger. She said that God’s messenger’s wives were in two parties, one including ‘A’isha, Hafsa, Safiya, and Sauda, and the other including Umm Salama and the rest of God’s messenger’s wives. Umm Salama’s party spoke to her telling her to ask God’s messenger to say to the people, “If anyone wishes to make a present to God’s messenger, let him present it to him wherever he happens to be.” She did so and he replied, “Do not annoy me regarding ‘A’isha, for inspiration has not come to me when I was in any WOMAN’S GARMENT (Thawb) but ‘A’isha’s.” They then called Fatima, sent her to God’s messenger, and she spoke to him, but he replied, “Do you not like what I like, girlie?” She said, “Certainly,” so he said, “Then love this woman.” (Bukhari and Muslim.) (English translation with explanatory notes by Dr. James Robson, [Sh. Muhammad Ahsraf Publishers, Booksellers & Exporters, Lahore-Pakistan, Reprint 1990], page 1361)

So from the above translations, some missionaries have deduced that the Prophet (p) used to wear actual clothes (dress) of his wife, Aisha. However, this is a lie which has no historical basis. Arabic-English Lexicons and further Hadith surrounding these reports tell us that the meaning here is that he was just covering himself with a blanket or sheet:

“ثَوْبِ, A garment, (M. Mgh, Msb, K,) [or PIECE OF CLOTH of cloth] … Es-Sarakhsee uses the phrase … (thiyaab). Mh) … [He clung to the CURTAINS of the House of God], i.e., to the curtains of the Kaabeh… (A.) – Sometimes, ثَوْبِ, is used metonymically to signify A thing [of any kind] that veils, covers, or protects.”(Edward William Lane’s Arabic-English Lexicon (Dictionary) volume 1, page 362)

From Al-Andalus to Khurasan: Documents from the Medieval Muslim World:

“CLOTH.
-, Cotton
– in piece. ثَوْبِ.
– Tracing. (English-Arabic vocabulary for the use of officials in the Anglo-Egyptian Sudan, by Captain Harold Amery (1905) page 71)

The following report also tell us that thawb just means a cloth or sheet one can wrap himself/herself in:

“Ibn ‘Umar reported the Messenger of Allah as saying, or reported ‘Umar as saying: if one of you has two (piece of) CLOTH, he should pray in them; if he has a single (piece of) CLOTH, he should use it as a WRAPPER, and should not hang it upon the shoulder…
ابْنِ عُمَرَ، قَالَ قَالَ رَسُولُ اللَّهِ صلى الله عليه وسلم أَوْ قَالَ قَالَ عُمَرُ رضى الله عنه ‏ “‏ إِذَا كَانَ لأَحَدِكُمْ ثَوْبَانِ فَلْيُصَلِّ فِيهِمَا فَإِنْ لَمْ يَكُنْ إِلاَّ ثَوْبٌ وَاحِدٌ فَلْيَتَّزِرْ بِهِ وَلاَ يَشْتَمِلِ اشْتِمَالَ الْيَهُودِ ‏”‏ ‏ (Sunan Abi Dawud Book 2, Hadith 635, Sahih Al-Albani)

The reason why “cloth”, “blanket” or “sheet” is more appropriate translation for the mistranslated Hadith reports, is because this is how it was classically understood. The thing Prophet Muhammed (p) was under was a sheet or a blanket of Aisha, as the following Hadith reports testify on this very same incident:

“It was narrated that ‘Aishah said: “The Messenger of Allah said: ‘O Umm Salamah, do not bother me about ‘Aishah, for by Allah, the Revelation has never come to me under the BLANKET of any of you apart from her.'” (Sunan an-Nasa’i volume 4, Book 36, Hadith 3401, Sahih Darussalam)

“It was narrated from Umm Salamah that the wives of the Prophet asked her to speak to the Prophet and tell him, that the people were trying to bring their gifts to him when it was ‘Aishah’s day, and to say to him: “We love good things as much as ‘Aishah does.” So she spoke to him, but he did not reply her. When her turn came again, she spoke to him again, but he did not reply her. They said to her: “How did he respond?” She said: “He did not answer me.” They said: “Do not leave him alone until he answers you or you comprehend what he says.” When her turn came again, she spoke to him and he said: ‘Do not bother me about ‘Aishah, for the Revelation has never come to me under the BLANKET of any of you apart from the blanket of ‘Aishah.'” (Sunan an-Nasa’i volume 4, Book 36, Hadith 3402, Sahih Darussalam)

“Narrated ‘Aishah: “The people used to give their gifts [to the Prophet on ‘Aishah’s day.” She said: “So my companions gathered with Umm Salamah and they said ‘O Umm Salamah! The people give their gifts on ‘Aishah’s day, and we desire good as ‘Aishah desires, so tell the Messenger of Allah to order the people to give (their gifts to) him no matter where he is.’ So Umm Salamah said that, and he turned away from her. Then he turned back to her and she repeated the words saying: ‘O Messenger of Allah! My companions have mentioned that the people give their gifts on ‘Aishah’s day, so order the people to give them no matter where you are.’ So upon the third time she said that, he said: ‘O Umm Salamah! Do not bother me about ‘Aishah! For Revelation has not been sent down upon me while I was under the BLANKETS (lihaaf) of a woman among you other than her.'”. (English Translation of Jami At-Tirmidhi, compiled by: Imam Hafiz Abu Eisa Mohammad Ibn Eisa At-Tirmidhi [Translated by: Abu Khaliyl (USA), Ahadith edited and referenced by: Hafiz Abu Tahir Zubair Ali Za’I, Final review by: Islamic Research Section Darussalam, Maktaba Dar-us-salam, 2007], volume 6, page 492 – 493 ( Book 46. Chapters on Al-Manaqib [Chapters On Virtues] Chapter 62. About The Virtue of Aishah. Hadith No. 3879)) [1]

Here is a screenshot for the above quote, from Jami at-Tirmidhi book: 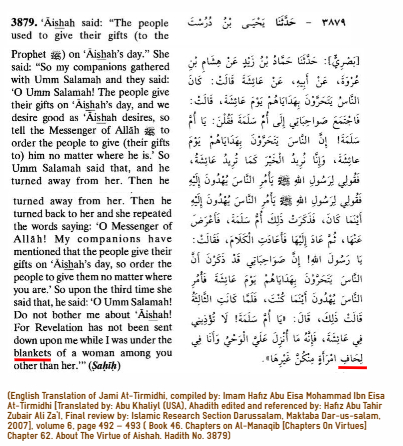 So as we see, the thing Prophet Muhammed (p) was using, was Aisha’s blanket. With the above in perspective, we see here, in this case thawb just means blanket or a sheet. The surrounding other reports show clear cut evidence that thawb here means blanket or any sheet that one can cover himself/herself with. You have these type of sheets in any house where there is a bed.

Given that some of these missionaries have tried to argue that thawb here means only clothes (dress) that a woman wears and nothing else, we are going to present verses from the Bible where Prophets are said to have thawb on or wrapped themselves in.

6And Joshua rent his CLOTHES (thiyab), and fell to the earth upon his face before the ark of Jehovah until the evening, he and the elders of Israel; and they put dust upon their heads.
6فمزّق يشوع ثيابه وسقط على وجهه الى الارض امام تابوت الرب الى المساء هو وشيوخ اسرائيل ووضعوا ترابا على رؤوسهم. “(Van Dyke Arabic Bible Translation) American Standard Version, Joshua 7:6)

19 And Jesus arose, and followed him, and [so did] his disciples.
20 And behold, a woman, who had an issue of blood twelve years, came behind him, and touched the border of his GARMENT (thawb):
21 for she said within herself, If I do but touch his GARMENT (thawb), I shall be made whole.
Arabic:
19فقام يسوع وتبعه هو وتلاميذه.
20واذا امرأة نازفة دم منذ اثنتي عشرة سنة قد جاءت من ورائه ومسّت هدب ثوبه.
21لانها قالت في نفسها ان مسست ثوبه فقط شفيت. “ (Van Dyke Arabic Bible Translation) American Standard Version, Matthew 9:19-21)

Since these best exemplars wore/wrapped themselves in thawb, in the Bible, are missionaries going to argue that Prophet Joshua, Aaron and Jesus god in flesh were all cross dressers?

We are not through the word thawb just yet, since we have more to say in the next segment, unveiling missionary deception and we also find from the Bible that the word (thawb) is described as a piece of “cloth” or a “sheet”.

« What Was Rebecca’s Age When Given Away In Marriage? “Na’ar”
Aisha’s Thawb: Missionary Deception Unveiled [Part 2] »