Arabic Word Nikah and its Meaning

In this article I will be referencing and quoting from numerous scholarly sources that will define the Arabic word ‘Nikah’ as meaning marriage, marriage contract, betrothal.

For the past several months I have seen critics, especially brainless Christian missionaries on Facebook and other places saying that the Quran has a vulgar word in it. They say the Arabic word ‘Nikah’ (according to them) means F-ck. Let’s be clear that the Arabic word ‘Nikah’ is not an offensive word. Whenever it used in the Quran or in the Hadith (authentic sayings of Prophet Muhammed p) it only means marriage, marriage contract and nothing more.

Definitions on the Arabic word ‘Nikah’

1. In the book ‘Introduction to the Holy Qur’an’ – Abd Al-Rahman Doi

“Nikah: Nikah literally means conjunction or uniting. In the Islamic legal system, it implies a marriage contract in the presence of a minimum of two males.” [1]

“Nikah, A word which, in its literal sense signifies conjunction, but which in the language of the law implies the marriage contract. [Marriage.]” [3]

“nikah (nee-kah) – conjunction; legal marriage contract, or the social-religious rite which, according to Islamic law, validates the marriage.” [4]

“There are two main terms used to refer to marriage in Islam: nikah and zawaj. These are Arabic words, and the roots of both are found in the Koran. Both are used to refer to marriage in Arabic-speaking countries. In most non-Arabic-speaking Muslim countries, the word nikah is the conventional term used to refer to the contract of marriage (aqd al-nikah).
In some countries the term also refers to the wedding ceremony, incorporating the contract. The difference between the two words is linguistic. Nikah incorporates the meaning of the act of physical union between spouses as well as the legal and social institution. While the root of the word zawaj denotes pairing. There are various terms for the wedding itself in Arabic-speaking countries….” [5]

6. Principles and Precedents of Moohummudan Law

“Nikah, as explained by Shakespear, is an Arabic term signifying marriage, or matrimony.” [6]

7. The Cambridge Companion to American Islam

“Typically, both mutual consent and evidence of the mahr are expressed in the marriage contract, also known as nikah, the Arabic term for marriage and the word generally used to refer to the marriage ceremony.” [7]

“The marriage ceremony itself is called the nikah, an Arabic word that refers to the relationship between a man and woman and the actual contract of marriage.“ [8]

9. Foundations in RE – Par Ina Taylor

“Nikah (Ar. ‘marriage’): referring to the marriage contract in Islam, binding on the two parties, the bride and the groom. The marriage contract (nikah) becomes complete with the giving of mahr (Ar. ‘dowry’) to the bride, and the bride’s consent to the marriage in front of witnesses. Finally, when the marriage agreement is accepted and witnessed, those who are present recite al-Fatiha (Ar. ‘the Opening’), the first surah of the Quran. The ceremonies that follow or precede the marriage contract may vary often reflecting cultural and ethnic traditions of the marrying parties and their families.” [9]

11. An Arabic-English vocabulary for the use of English students of modern Egyptian Arabic – Donald Andreas Cameron

12. English-Arabic Dictionary: For the Use of Both Travellers and Students – Professor Francis Joseph Steingass

15. A Concise Encyclopedia of Islam – By Gordon D. Newby

Nikah – The ceremony whereby a male and a female are married. [17]

18. The Easy Dictionary of the Qur’an – Shaikh AbdulKarim Parekh

نِكَاحًا
To marry, contract a marriage.
…To give in marriage
… To give and take in marriage
To Marry
نَكَحَ
Marriage; marriage contract. [19]

We see from all these references that the Arabic word ‘Nikah’ only means marriage, marriage contract. It’s clear whatever critics have assumed on the word as being ‘offensive’, it has been refuted by Muslim and non-Muslim scholarly evidences. 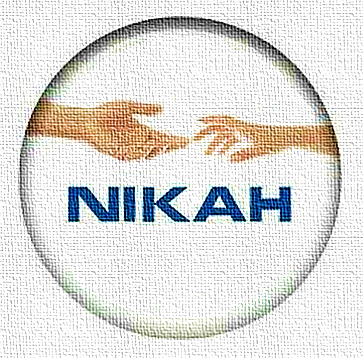 Leave a Reply to geraldine a caldwell[saleemah] Cancel reply